We’re thrilled to announce that we received the award for “Most Innovative Campaign” at the recent NHS Employers Flu Fighter Awards 2019. 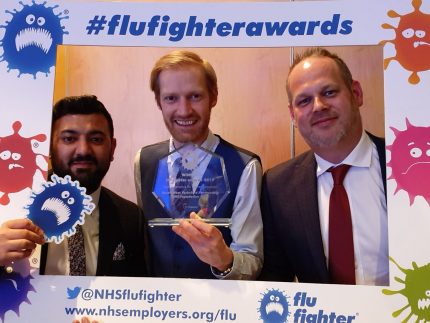 The annual awards took place on Monday 25 March at the Midland Hotel in Manchester. Hosted by NHS Employers chief executive, Daniel Mortimer, the awards were an opportunity to recognise the hard work of flu fighter teams at NHS Trusts around England.

The esteemed award, sponsored by Abbott was given to us for ‘revolutionising the flu campaign to focus on the areas which motivated staff to get the flu jab: caring for the health and wellbeing of themselves, their families, and service users. The powerful posters designed for the campaign, featured staff tending to vulnerable patients and saw them replace the messaging of ‘comfort giver’ with ‘flu giver’ to drive the message home.’

Jude Tipper, head of marketing, communications and engagement said: “It was very important to the Trust when we devised our flu campaign that it was based on the concerns and insight of our staff. The campaign was developed on the back of 1700 responses from our staff. We knew that the creative concept for this campaign was hard hitting and would get people talking about their reasons for having – or not having – their flu jab. Our brilliant in-house comms team always try and push the boundaries with our communications materials so I’m delighted it has been externally recognised in this way. All credit goes to my team for their great collective work on not only the posters but the wider campaign and their strategic approach to it.”

The Trust would like to thank everyone who contributed their time and effort to this award winning flu fighter campaign. 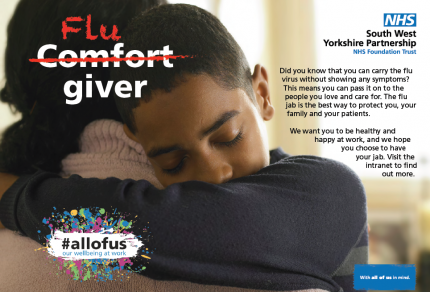 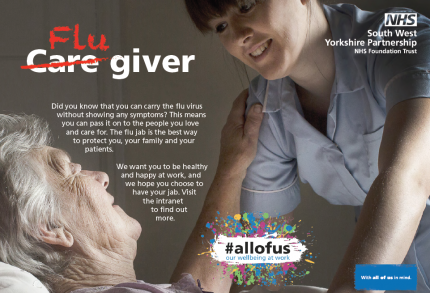 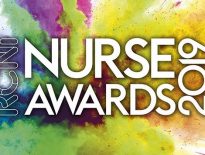