To celebrate Pride Month, matron Tim Mellard shares his story of how attitudes have changed in the time he’s worked in the NHS.

“As a newly registered nurse in 2003, I chose to initially keep my sexual orientation private as I didn’t know what kind of response I would receive. Feeling safe within a supportive environment, I eventually came out to colleagues within a few months… But the feelings of being safe and supported soon changed.

“One example I can remember is having two colleagues who would make a point of looking at me in handover when a gay patient was admitted, making comments like “They are a gay as well” or often being in their presence when they made comments about gay men such as “shirt-lifter”, “get your backs to the wall lads” and other discriminating remarks. I regret never speaking out about it at the time, but none of my colleagues did either.

“20 years on, I am proud to work in such an inclusive organisation. For the last 10 years at least, I have experienced no feeling of discriminatory behaviour from colleagues, in fact quite the opposite, working with some amazing colleagues in the acute mental health inpatient services.

“I still get a few comments that I would call innocently misplaced, like “I didn’t know you were gay, you don’t look it”, “Ooh it’s a shame love, you’d have made a lovely husband for my daughter”, “I know someone who is gay in Wakefield, I wonder if you know them?” but these really don’t offend me. Society is changing for the better but there is still a way to go.

“If there is one take home message I would give to colleagues, it would be to never feel uncomfortable to ask questions, and if you ever do hear anything that is discriminatory, even if it seems to be said in fun or as a joke, call this out or inform your manager or a freedom to speak up guardian.” 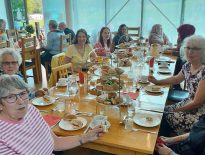