After smoking for 30 years, Ken decided to quit smoking in order to improve his health. Now, four months later, Ken is enjoying the benefits of being smoke-free. 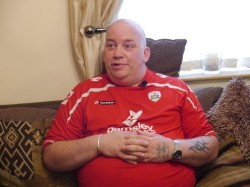 “I decided to give up smoking for a number of reasons; mainly because of my health. I visited the doctors and they told me I have poor circulation in my legs – hearing that really frightened me. They told me to stop smoking and said that it would mean the circulation problems wouldn’t get any worse and, over time, it would eventually get better.

When I’m at work if I want a cigarette I have to go off the premises to smoke, I don’t like to stand out in the wind and rain throughout the winter to smoke. That, combined with what the doctor told me, made me decide to quit.

For me, it’s been surprisingly easy to stop. I used the stop smoking service and they provided me with the help I needed. They have a number of different things to help you such as nicotine replacement therapy and counselling – I’d recommend them to anyone who’s trying to quit.

I’ve been smoke-free for four months now. I still get the urge to smoke a couple of times a week but when it happens I go outside, have a mint, and it passes after a couple of minutes.

I have a few friends that smoke but it doesn’t bother me. I used to smoke around 20 a day for 30 years and now if I see an ashtray I move it away!

To me, smoking was like a death sentence but I’m free now.”