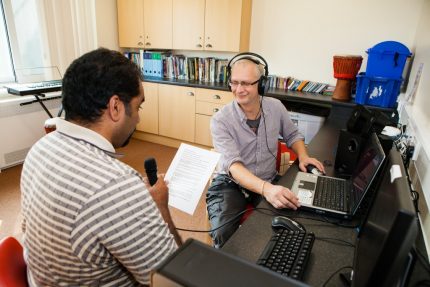 A music and arts practitioner at South West Yorkshire Partnership NHS Foundation Trust has won a national competition developed by the Nursing Times and NHS England which recognises best practice in compassionate care.

Paul Dews, who works at Newhaven, a learning disability unit in Wakefield, was chosen as the winner of December’s ‘6 Cs Live Story of the Month’, a competition that aims to find examples of excellence focussed around the 6 Cs of nursing; care, compassion, competence, communication, courage and commitment.

Paul developed an innovative approach to help a service user communicate with their family after the individual had expressed difficulty in describing their surroundings to family and friends. Paul worked alongside them to produce a DVD which included shots of the individual’s room and a ‘talking head’ section where they expressed their feelings in a way that they were unable to communicate before.

Paul said: “The whole team was committed to helping the service user; we knew that not being able to communicate was really affecting his mood and behaviour.”

“It was the first time that we had used technology in this way but it really paid off. It enabled the service user to take control, which in turn improved their mood and behaviour. It also gave their family reassurance.”

The service user, who now feels more positive and gets involved in other activities, said: “This process has made me feel so much better, knowing people know what it’s like where I am.”

Tim Breedon, director of nursing at South West Yorkshire Partnership NHS Foundation Trust, commented: “I am delighted that Paul’s compassionate care has been recognised in this way. It’s a great example of an imaginative, tailored approach that demonstrates the importance of working in true partnership with people who use our services.

“Every day our dedicated staff uphold the 6Cs of nursing and the values of our Trust, enabling people to reach their potential and live well in their community.”

Birte Harlev-Lam, head of maternity and children’s services at NHS England was one of the judges and said, “Paul’s story shows how going the extra mile can make such a difference. The panel felt that his approach demonstrated compassion and care in aiding this service user to communicate and express their feelings. Congratulations Paul.

“We know that the use of technology can really help patients and nursing staff and this is a perfect example of this in practice.