Service users enjoyed a night on the tiles with a difference as they put the finishing touches to a mosaic creation made from broken tiles donated by DIY chain B&Q.

Three service users from low secure unit Bretton Centre, based on the Fieldhead site in Wakefield, spent several months crafting the idyllic island image, which was chosen as the theme of the piece to represent relaxation and escapism. 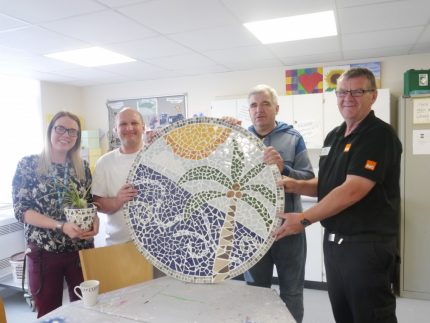 The tiles used were destined to be discarded as waste, but found a new destination on the service users’ sandy beach scene.

Activity co-ordinator Leah Brown helped the service users to decide on a theme, and encouraged them to use their crafting skills to also create mosaic plant pots and photo frames.
Service user Charles said: “I don’t usually do things like this but I really enjoyed it.”

Brian, another service user on the ward, has since used his new talent to take part in a community project in Leeds to create a mosaic which will be displayed outside Kirkgate Market.

Leah Brown said: “The service users had a really good time making the piece which we’re hoping to display in our Bretton Centre courtyard. We’ve just put some bedding plants in there so it will look lovely and bright in the good weather.”