Time to talk day is all about bringing people together to have a conversation about mental health. This is exactly what was on the agenda for the physical activity development team at the Exchange recovery college in Barnsley, who brought together the Sheffield & Hallamshire County Football Association and Oakwell Terriers FC for this years’ Time to talk day.

Oakwell Terriers FC was set up by the South West Yorkshire Partnership NHS Foundation Trust and volunteers at the Exchange Recovery College as part of the ongoing project of using sports, in particular football, to break down barriers and stigmas between sports and disabilities. The majority of players involved have a history of mental health illness and use the Trust’s services.

Hannah Burton, physical activity lead from the Exchange recovery college said, “We have worked closely in partnership with Sheffield & Hallamshire County FA for support, funding and opportunities for our projects. With their help we have entered Oakwell Terriers FC and other teams in both 5 and 11-a-side competitions and tournaments including the Sheffield FA Flourish, West Riding Ability Counts and Creative Minds good mood leagues”.

Due to the success and popularity of the project, the physical activity team hold four different football sessions a week- catering to different abilities and open to  all with disabilities (physical and mental). One session a week has been set up for the local community encouraging people such as asylum seekers, immigrants and the homeless to participate, socialise and enjoy football on a weekly basis.

Ian Henry, a service user and volunteer in the physical activity team as health trainer and walking for health lead, talked about his history of mental health. Diagnosed with paranoid schizophrenia in 2000, Ian’s journey to date hasn’t been easy, with reluctance to get treatment, long term stays in hospital and his condition deteriorating and improving over the years. However throughout the journey, his mainstay and inspiration to get through this, was his mother- “My mum was my hope, she was my rock. There were times when I refused to get better, gave in to the voices in my head and stopped taking my medication. But my mum wouldn’t allow it; she would stay by my side throughout it all, visiting sessions with me and keeping strong for me.  She was the one who got through to me and encouraged me to fight this, and so I did”.

It is because of this hope that Ian got involved with the projects and over time became a volunteer with the recovery college. In 2010, during his time at Kendray Hospital in Barnsley, he was encouraged to join in the football sessions as part of his visits to the physiotherapy. Although his paranoia affected his willingness to join at first, he decided to fight and pushed himself to take the step into taking part. It is there he gained the confidence to interact better with others and reignited his passion inside, doing something he loved, playing football.

“I met Hannah during the football sessions and she encouraged me to take up the offer to become an apprentice as a sports cadet and a walking for health instructor. In my role, I started to engage more with other service users, encouraging them to join in with football and other sports to aid their wellbeing. I wanted to help others and give them hope, like I got from my mum that it will get better. I tell them that even though it may not look like it at the moment, it does in fact get better.”

Ian spoke of his work with Sam in football with Oakwell Terriers and the importance of raising awareness of mental health in sports. “I have met Sam a few times, through the leagues and tournaments we have participated in. When he got in touch about ‘Time to talk day’ I was enthusiastic about getting involved. I want to eliminate the stigma about mental health- as people want to hold it in and don’t want to talk. But the time to talk is now, so people can be aware of the signs, how to live with it and the help that is available out there. And more than anything it’s to offer people the hope of getting better and the encouragement to fight their illness”.

Find out more about the fantastic work and projects being held by the physical activity development team at The Exchange recovery college by reading our brochure. If you would like to get involved, get in touch by contacting 01226 730433 or email Barnsley.Recoverycollege@swyt.nhs.uk. 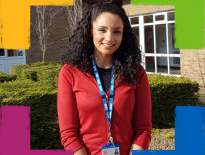 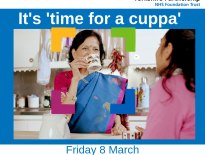 Uncategorized It’s ‘time for a cuppa’