North Kirklees insight team is celebrating its first birthday as one of the top performing services in the country.

The team plays a vital role in helping people at the early stage of psychosis to fulfil their potential and live well within their community, keeping care close to home.

Team Manager Szilvia Kormondi explains: “There are lots of risks involved with the people in our care. They may be scared, depressed, delusional and have adopted negative coping strategies to deal with their psychosis such as drinking or taking drugs.

“We engage people in a creative way, involve family if appropriate, look if medication can help, offer cognitive behavioural therapy and a wide range of activities such as sports and an allotment group. Mental and physical health are both equally as important.”

The North Kirklees team split off from the larger Kirklees team last August and have achieved great things despite some challenges along with way.

Szilvia said: “We are a small team of 11, originally part of a much bigger one, so that has been an adjustment and the team has been finding its identity over the past twelve months. We’ve also had a high demand for the service which we have coped with well. I’m very proud of the commitment and dedication of staff to those in our care. The key to our success is a healthy team culture, a shared vision and understanding of our goals.”

The nurturing and creative approach of the team pays off. In July, against a target of 60%, 100% of people were seen, offered a care coordinator and given support within 14 days of being referred to the service. 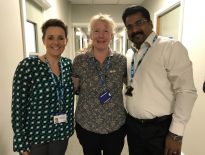 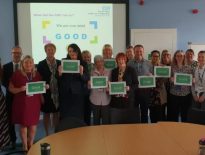