A skilled Trust volunteer has created a piece of artwork to thank Captain Tom Moore for his fundraising efforts for the NHS.

Inspired by Captain Tom, Johnny, a volunteer who is based in Newton Lodge at Fieldhead, crafted the art from newspaper cuttings and paint. The artwork shows Captain Tom carrying out his famous garden walk; which raised millions for NHS Charities Together. 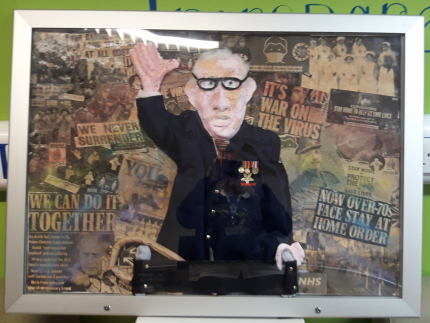 Johnny came up with the idea of creating an image or mosaic of Captain Tom, with support from peers and the therapy team at the Trust. The therapy team have been committed to keeping spirits up over the past few months through encouraging service users and volunteers to spend time on creative activities.

As part of the process of creating the artwork, the therapy team met with volunteers and service users to discuss ideas for creating the piece of artwork. A regular session was set up for the project which soon took the form of a 3D image of Tom, surrounded by headlines and images relating to the Coronavirus pandemic.

Tom’s head and hands were made from MOD-ROC, his body was cloth and several other materials were used. A subtle rainbow was created by using coloured sand over the headlines, this gave the finishing touches to the piece of artwork.

Adrian Wilson, ward manager at South West Yorkshire Partnership NHS Foundation Trust, said: “I was privileged to have sight of the artwork before it was unveiled to the volunteer team. It was outstanding and I was absolutely amazed with the quality and efforts that had gone into it!

“It was an exceptional piece of art, not to mention the powerful message the image delivers to us all about standing strong together in these very challenging and uncertain times.

“We are delighted with what had been produced and this was mirrored by the volunteer team when we delivered it to them.”

Johnny, volunteer at the Trust, said: “When I heard about what Captain Tom was doing with his walk, I was impressed.

“I had done charity walks before and I was considering doing something similar in our sports hall, but due to the pandemic this was not possible.

“It was then that I thought it would be nice to do a piece of artwork to say thank you to Captain Tom from the NHS, for what he was doing for the NHS.”

time to read: 2 min
Uncategorized An update on our services from Thursday 5 November… 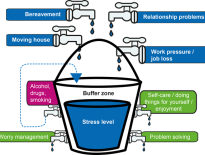