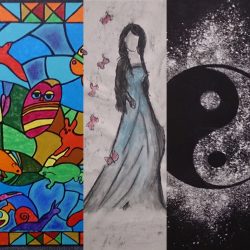 A competition to produce art to be exhibited at the new Drury Lane Health and Wellbeing Centre, in the city centre, was held across the Trust. Local artists, volunteers, service users, partner organisations and staff were all involved in judging the artwork.

The artwork competition was launched back in November 2016 to ensure that service users from across the Trust would be able to get involved with the look of the new health and wellbeing centre in Wakefield.

The Drury Lane hub opened in October 2016 and is part of wider multimillion pound programme of investment across Wakefield services. As well as the new Baghill House health and wellbeing hub in Pontefract, the Trust is investing £17m at Fieldhead Hospital to transform mental health services in the region.

The top three winning pieces of art, which will soon all be on display in the internal garden, are a mixture of art styles and subjects. First place went to Newhaven ward, with their colourful, mosaic piece which featured numerous animals. Johnson ward, which finished second, entered a drawing of a beautiful, forlorn woman who would not look out of place on the Yorkshire Moors in a Brontë novel, walking in a blue dress surrounded by butterflies. Third place went to Trinity 2 for their yin-yang circle, created effectively with white paint around a stencil on black card.

Chippendale and Priestley wards will also have artwork displayed in the new hub.

Lindsey Taylor-Crossley, Wakefield and 5 Towns Recovery College co-ordinator, said “The entries we received were all of such a high standard, there was much discussion around the winning places amongst the judges”.

“We hope the artwork will bring some life to the walls, invite discussions around the pieces and their origins and give the service users some ownership of the new hub”.

Two of the pictures are already up in the internal garden with the third soon to be.