Royal College of Psychiatrists accreditation for ADHD and Autism service

Support available to get you through these difficult times

Spring has come to the Newton Lodge therapy gardens

The Olympics come to Newhaven

Community staff nurse Natasha Cashmore will be taking to the skies to mark 10 years since the passing of her baby daughter, which falls in the 10th year of her working for the NHS.

Natasha, who works as part of the Barnsley district nursing team, will take part in a charity skydive this September to raise money for Sheffield Children’s Hospital where her daughter Grace was cared for.

Natasha said: “To mark Grace’s first big anniversary I wanted to give something back so I got in touch with Sheffield Children’s Hospital. Through all the bad memories of her dying so suddenly and unexpectedly the people there gave me hope that good people still exist. I wanted to give something back so I’m going to throw myself out of plane, hopefully raising as much money as I can along the way.

“I’m very grateful for my donations but what I really want to get out of this is to raise awareness for people who are struggling. When my daughter died I went to a really bad place and I want to let everyone know that it’s okay not to be okay. I want people to know that they can get through this. You’ve got to handle your grief in any way that you can – and apparently for me that means throwing myself out of a plane!”

If you would like to donate to Natasha’s charity skydive, visit her donation page. 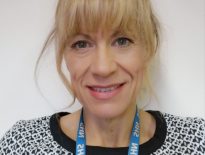