On 5 July 2020, it will be 72 years since the NHS and social care system was established. 2020 has been the most challenging year in NHS history.

This year, the birthday is an opportunity to recognise, reflect and remember.

Our patient affairs officer Evelyn Beckley was chosen as the winner of the Operational Service Excellence category at the prestigious NHS70 Windrush Awards back in 2018.

Evelyn, who has worked for the NHS for over 25 years, was nominated for going beyond the call of duty to make a positive difference to service users. Her role sees her administrate benefits for inpatients, supporting them with their claims and helping them pay bills.

Evelyn has transformed the Trust’s basic banking service into one that looks after range of service users’ financial needs, empowering them to get used to budgeting and managing their own benefits.

The Windrush Awards, held in Manchester, celebrated the contributions and diversity of black and minority ethnic (BME) people to the NHS. They marked the 1948 arrival of German cruise liner ‘Empire Windrush’ at Tilbury docks which carried 492 passengers from the West Indies on 22 June. Many passengers were among the first to go and work in the newly formed National Health Service which launched just two weeks later.

To date, the NHS remains the largest employer for BAME staff, who make up a fifth of the workforce.

Trust chief executive Rob Webster, who attended the awards with Evelyn, said: “Well done to everyone nominated at the Windrush Awards and congratulations to the most excellent Evelyn. What an uplifting and positive celebration of talent.” 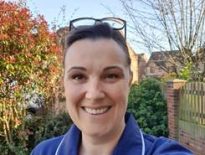