The ward received a gold certificate from the Improvement Academy for going 39 days without a violence and aggression incident. Previously, the ward had an average of almost three a week.

The team achieved this by introducing daily five-minute safety huddles, where they meet to discuss ways to reduce and prevent specific areas of harm. They also use the time to learn lessons from previous events.

The Improvement Academy is part of the Yorkshire and Humber Academic Health Science Network (AHSN), and supports work to improve services in a number of priority areas for patients and partners.

Cassie Metcalfe, ward manager, said: “We’ve managed to reduce our incidents of violence and aggression through teamwork and having a better understanding of our patients through the safety huddles. Every member of the team attends them and we put plans in place and review them together. As a team we are now more aware of behaviours and triggers that may lead to incidents.

“Even if people aren’t directly involved in incidents of violence and aggression, they can be distressing to watch. By reducing the number of incidents, both staff and service users feel a lot safer and more positive while on the ward.” 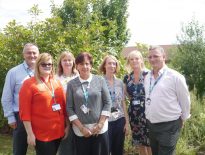